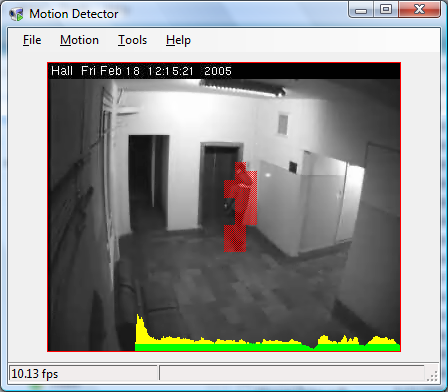 The sample application demonstrates the work of different motion detection algorithms. With this application it is possible as just to enable/disable motion detection, as turn on different motion post-processing algorithms, like highlighting of motion regions. It supports number of different video sources, which includes USB web cameras, JPEG snapshots and MJPEG streams over HTTP (IP cameras), local video files. In addition, it allows specifying regions of interest, where the motion should be detected. Yet another feature of this application is to show motion history – a chart on the bottom, which shows history of detected motion level.

Ants first evolved around 120 million years ago, took form in over 11,400 different species, and are considered one of the most successful insects due to their highly organised colonies, sometimes consisting of millions of ants.

One particular notability of ants is their ability to create “ant streets”. Long, bi-directional lanes of single file pathways in which they navigate landscapes in order to reach a destination in optimal time. These ever-changing networks are made possible by the use of pheromones which guide them using a shortest path mechanism. This technique allows an adaptive routing system which is updated should a more optimal path be found or an obstruction placed across an existing pathway.

Computer scientists began researching the behaviour of ants in the early 1990’s to discover new routing algorithms. The result of these studies is Ant Colony Optimisation (ACO), and in the case of well implemented ACO techniques, optimal performance is comparative to existing top-performing routing algorithms.

This demonstration shows how ACO can be used to dynamically route traffic efficiently. An efficient routing algorithm will minimise the number of nodes that a call will need to connect to in order to be completed thus; minimising network load and increasing reliability.

This sample application demonstrates usage of the API to control Lego Mindstorm RCX robotics kit. With the sample application it is possible to connect RCX brick (USB IR tower is required), read its sensors’ values, control motors, get information about the device and play simple sounds on the device.

The sample application is very similar to the above one, but demonstrates usage of API to control Lego Mindstorm NXT robotics kit. The application provides the same functionality – connecting to NXT brick (over Bluetooth), checking its sensors values, controlling motors, etc.

Brain Designer is a visual behaviour tree editor. It allows you to build behaviour trees by using simply drag&drop. The editor supports plugins, exporters and stores behaviours as XML files.

Please notice that the Brain Designer is an editor. You have to write your own exporter which generates files for your AI. The editor contains no node logic so it contains no AI. You have to implement the nodes by yourself. Nodes can be added, removed or modified by modifying the source code of the example plugin included.

Support for Workspaces and Plugins